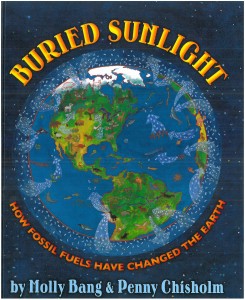 I love Molly Bang and Penny Chisholm’s new book, Buried Sunlight: How Fossil Fuels have Changes the Earth. I’m reading it in science class because it does such a wonderful job of describing some key science concepts.

The book lays out the processes whereby the energy from the sun, millions of years ago, became the fossil fuels we use today.

Bang and Chisholm outline the way human use of these resources is changing the carbon balance in the Earth’s atmosphere, thereby increasing its capacity to hold heat.

As a science teacher at the upper elementary early/middle school level, I love the way they explain key science concepts so well. Here’s a quick run-down of some of the concepts that they make understandable. This clarity and accuracy make it a great interactive read aloud to do with the children.

Big Idea 1. Photosynthesis stores energy from the sun in the chemical bonds within the carbon chains. 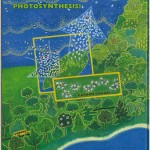 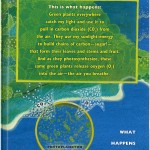 This concept is crucial for understanding how energy flows within ecosystems.1 Everyone knows that plants create food, but not many of us have thought very deeply about what that means. As Bang notes, plants use the Sun’s energy to create (synthesize) long carbon chains, thereby effectively storing the energy in these chemical bonds.2 When Bang states this crucial connection so plainly, it is so much easier to reconcile photosynthesis with the Law of the Conservation of Energy, which states that energy cannot be created or destroyed, but can be changed from one form into another. Photons of energy from the sun get changed into chemical energy stored in the bonds of carbon chains. Cool beans. And it so wonderful to have a text that helps children see the synthesis part of photosynthesis, how really understanding it helps us see how energy is stored and then transferred through ecosystems or, in resources like fossil fuels.

Big Idea 2. Animals break down long carbon chains into carbon dioxide by “burning” it with oxygen. Where does our food go once we’ve eaten it? If you ask someone that question, many will say it either gets turned into more body mass (that happened this Thanksgiving!) or excreted, yup, as poop. But many don’t think about how a large portion of that food (those long carbon chains) is disassembled (burned, really) to release the energy stored in the bonds between the atoms. A by-product from this destruction is the carbon-dioxide we breathe out. We had a great discussion today about that Cycle of Life in science class. We came to see that animals basically destroy the carefully constructed carbon chains that plants make (the way your 2-year old brother destroys your Lego structure); plants take the small pieces of carbon-dioxide and make more carbon chains (the way you carefully build up another structure from the strewn pieces.) And that happens over and over and over again. 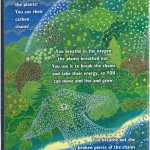 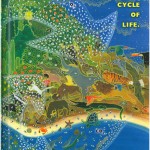 Big Idea 3. Plant tissues are made mostly of air. Now that’s hard to imagine. A few years ago the Annenberg Foundation asked Harvard graduates where the mass present in wood came from (See this link to A Private Universe.) Many responded that the mass came from the soil, even though they had studied photosynthesis in high school and college. Bang’s text makes it clear that plant tissues, including wood, actually comes from carbon dioxide, which is a colorless GAS, not a solid like soil. That’s counter-intuitive; it’s hard to believe that something solid and hard, like a piece of wood, can be created from thin air. But it is.

You can see that misconception is still alive in this video from the fine science YouTube video channel: Veritasium.

Big Idea 4. Global Climate change happens all the time, but this time it is happening FAST! Global climate change skeptics often argue that climate change happens all the time, so this is just one more example of how Ice Ages come and warm spells go. Bang makes it really clear that while this is true, the rate of change is tremendously fast. And that quickness creates problems that the other change events did not create. This is another crucial idea that Bang’s text makes really clear.

Big Idea 5. Humans have a choice. I love the way the book ends: “Or will you work together to use my ancient sunlight more slowly, find other sources of energy, and invent new way to thin the blanket of CO2? The choice is yours.”

And, yes, the choice is ours.

Thanks, Molly Bang and Penny Chisholm, for your choice to write this book.